Home > News > The Transition Of Deflagration To Detonation 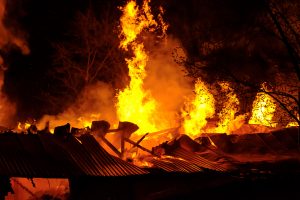 Many industrial processes and food production facilities use machinery that operates under tremendous internal pressure or include dusts which can lead to deflagrations under certain circumstances. If the right set of conditions were to occur, an explosion (rupturing of the vessel or equipment) would take place that could jeopardize the lives of workers and destroy millions of dollars’ worth of equipment.

Those conditions are called deflagration, and they can, at times, lead to an even more catastrophic condition called detonation—a devastating explosion. This is why the National Fire Protection Association (NFPA) has come up with a set of codes and standards that help prevent a deflagration event from turning into a detonation one.

Read on to learn more about deflagration vs. detonation and how you can go about improving worker safety while protecting your company assets.

Deflagration is defined as the burning (combustion) of something that’s disbursed throughout an oxidizing atmosphere. The “burn” propagates a flame front through the disbursed mix of that fuel and air. This burning “front” moves through the mixture at a speed less than the speed of sound.

Another uncommon example of deflagration is when you (carefully) throw some bakery flour or powdered sugar onto an open flame. The resulting fine particles that are disbursed into the air will quickly burn, thereby causing deflagration and a resulting flame wavefront. Deflagration stops when the fuel has been completely consumed.

When deflagration is contained in an enclosure, it can result in an overpressure as the air-fuel mixture burns and expands as it heats up, and causes that vessel to rupture.

“Detonation” is defined as when the flame of the burning material travels faster than the speed out sound (around 1100 ft/sec at sea level). This often results from material that contains its own excess oxidizer (e.g., dynamite). However, due to their complicated nature, certain geometries or composition can develop detonation conditions from the deflagration process using normal materials. (For example, low octane gasoline can detonate [causing “knocking”] in high performance engines)

“Detonation” is defined as when the flame of the burning material travels faster than the speed out sound (around 1100 ft/sec at sea level). This often results from material that contains its own excess oxidizer (e.g., dynamite). However, due to their complicated nature, certain geometries or composition can develop detonation conditions from the deflagration process using normal materials. (For example, low octane gasoline can detonate [causing “knocking”] in high performance engines)

Dangers Of Detonation vs. Deflagration

Consider the gas stove inside your home. While the fuel (natural gas) is being burned, it’s relatively safe. However, if no spark were to occur when you turn the stove dial to the “on” position, the gas will flow into the kitchen unimpeded and create a giant cloud. If a spark, heat, or arc were to occur, the entire cloud of natural gas would ignite. If the windows are open (no containment) a deflagration would occur, with potential negative consequences. However, if this deflagration is contained with all the windows and doors closed it could cause an explosion – structural failure of the building (the “vessel”).

Instantaneous pressures from the detonation are far higher than deflagration-induced pressures;  they are estimated to be two to four times that of deflagration pressures.

So, when does slow burning deflagration become faster-than-sound detonation?

The exact point is challenging to predict. What’s important is that detonation is a very real risk factor, and it’s imperative to have various safety control devices in place to help mitigate it.

Some historical examples of the results of a transition from deflagration to detonation include:

How Do Explosion Doors Prevent Deflagration From Turning Into Detonation?

Explosion doors are safety devices installed on pressurized vessels in many different industrial applications. They’re designed to instantaneously open at a predetermined pressure well below the pressures that could cause the vessel to rupture (explode) or detonate. required for an even bigger explosion (detonation).

At Smart Machine Technologies, our doors meet NFPA 68 “Standard on Explosion Protection by Deflagration Venting,” which prescribes an opening pressure that is a fraction of the anticipated “explosion” pressures of the vessel. They are constructed to a calculated door size using a magnetic latching mechanism that opens at that prescribed opening pressure.

Protect Your Facility From Dust Explosions 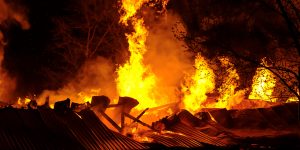 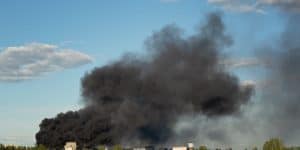 The night of February 7th, 2008, was like any other night at the Georgia Sugar Refinery—that is, until a massive factory explosion lit up the Savannah, Georgia night sky. As a … END_OF_DOCUMENT_TOKEN_TO_BE_REPLACED

The dust generated during manufacturing or industrial processes is a proverbial ticking time bomb that can cause catastrophic damage to both equipment and personnel. Seemingly … END_OF_DOCUMENT_TOKEN_TO_BE_REPLACED